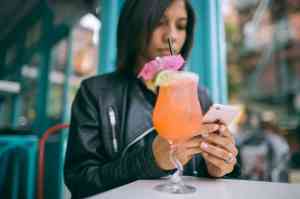 So one of your exes hit you up with a “Hey bighead” text. Or the equally annoying “I miss you” text.

Now your parents will advise you to ignore and block the imbecile. While your close friends expect you to wreck havoc on the idiot and give him the runaround.

You aren’t feeling any of those options because even though he hurt you, you still have feelings for the jerk.

Coming from someone who has been there and an aspiring psychotherapist (1 year left 🙌🏾). Here are five ways to respond that will leave you empowered.

1) Just say “what’s up”
You don’t have time for the messiness and shouldn’t attempt to make any. So don’t entertain him. Ask him to get straight to the point because there is no need for any shenanigans. He doesn’t miss you… he just lacks the communication skills to tell you what he is really after. (Hint: it’s probably a booty call)

2) Ghost him until you “miss” him
The fact that he is reaching out to you means that he’s a free agent again. Or at the very least, he and his newest girlfriend are on the rocks. You don’t need all the details (meaning don’t ask). But you can ignore the message until you feel like engaging. I usually wait weeks… lol then respond with “what’s up”.

3) Call him instead
Odds are he is just looking for a momentary friend. But you have been waiting to get all those unsaid words off your chest. Don’t send it in a text and leave the thread there for you to reread (over and over again). Just call him and have at it. Remember the point isn’t to rekindle a relationship. You don’t deserve to be hurt again and you are worth more than a text message out of the blue.

4) Send him a picture of you and your new Bae
Clearly, he hasn’t taken a look at your social media accounts. Or he has and thinks you still want to play games with him. Go ahead and let him know you are taken.

5) Tell him to meet you in person
These type of messages from your Ex aren’t sincere gestures. If he wants to apologize have him do so in person with flowers. Text him a public location to meet at and let him know his sincerity is appealing. Then drive by and take pictures of his behind with the flowers in his hands to share with your friends. You don’t owe him anything and it’s ok for him to “be the fool” for once.

Even if you don’t commit to any of the above five ways of engaging with your Ex, limit your contact with him. You are still adjusting to life without him and every day that passes you are becoming more resilient. Certain triggers no longer make you break down and you have new hobbies that have nothing to do with him. Don’t find ways to include him in your lifestyle especially since you know he is capable of disappearing again.

Ashleya Nicole's uses hip hop culture to influence her writings about life, love and their lessons. She is an avid Jay Z fan and is known to quote him in conversations. ❤️ View more posts